Last Week In PlayStation #14 | The Last Of Us Part I Gameplay Revealed, Spider-Man Remastered PC Features Outlined, And PlayStation Toys Coming In 2024

Hello and welcome to the fourteenth edition of Last Week In PlayStation, the weekly PlayStation newsletter here on platyview.com.

This article is going live two days late so out with the excuses and in with the news. Here is what went down in the world of PlayStation last week.

The remake of 2013's The Last of Us was announced at Geoff Keighley's Summer Games Fest back in June. We were treated to a cinematic trailer showcasing the game's updated visuals in cutscenes. Two weeks ago, the game was announced to have gone gold. Last week, we finally got our first raw look at the game, and it's safe to say not everyone was impressed.

In a more than 10-minute video on the PlayStation Youtube channel (and an accompanying PlayStation Blog post), NaughtyDog provides a glimpse at the 'host of gameplay and presentation enhancements coming with this remake. The stream of footage is paired with developer interviews in the form of studio co-president Neil Druckmann, creative director Shaun Escayg, and game director Matthew Gallant.

First up, the techy part: on launch, the game will run at a 'native 4K [resolution] at targeted 30 FPS or dynamic 4K at targeted 60 FPS'. The Last of Us Part I will also make use of PS5 features such as the 'DualSense wireless controller haptics, trigger effects, and 3D audio'. But NaughtyDog were quick to emphasise that this is not simply a resolution and frame-rate bump that takes advantage of the PS5's power.

"From the art direction to the character models, the entire game has been rebuilt from the ground up to take advantage of a new generation of graphical capability, allowing this game to reach the visual fidelity that the studio aspired for when crafting this experience. The PS5’s powerful hardware drives a host of visual benefits, from denser physics with tons of bumpables and chipables (bullets can now rip apart concrete and environmental objects) and cinematics now transition seamlessly to gameplay. Motion matching technology means that character animations flow more convincingly, intuitively and realistically; all adding another layer of believability to characters and their interactions with the world. Further, AI upgrades mean that characters inhabit the world in a more authentic and realistic way, such as buddy characters navigating cover to avoid enemy NPC sightlines more authentically."

Some fan-requested features have been added as well. A permadeath mode, speedrun mode, and unlockable costumes for Joel and Ellie are brand new additions. The also has an extensive list of accessibility settings, allegedly "outpacing" what was available in The Last of Us Part II.

This all is cool and whatnot, and certainly something expected from a full-priced game, but it seems the game is skipping on one key addition: improved gameplay. The Last of Us Part II was not only a colossal graphical leap from the original, but it also took stealth and combat to the next level. To see this remake veer a sharp left away from these improvements is, frankly, odd.

That said, the original Last of Us is still an incredible game, and the 2014 PS4 remaster still holds up really well. This remake is certainly not for everyone, but those keen on experiencing Joel and Ellie's post-apocalyptic trek through the zombie-infected United States will certainly find something to love when the game launches on the 2nd of September.

Maybe then, finally, all the discourse will be over. I doubt it though.

Last month, it was revealed that Insomniac's Spider-Man series was making its way to PC. The 2018 original - in the form of 2020's remastered edition - would make landfall first, arriving on PC on the 12th of August. 2020 spin-off, Miles Morales, would arrive at a later date. While this date is still unknown, Marvel's Spider-Man Remastered's PC port is a little over a fortnight away.

Well, now we have a blog post and trailer outlining the game's PC features. I am going to keep the PC jargon down to a minimum and just run through the essentials. The game will feature ray-tracing (with 'varying quality levels'), Nvidia DLSS (to boost frame rates without drops in visual quality), and Nvidia DLAA (to reach higher levels of graphical quality).

Beyond that, the game will support various output ratios, from ultrawide to panoramic, and even multi-monitor setups. Both keyboard and mouse, and controllers will be supported. For you trophy addicts out there, the game will feature achievements on both Steam and the Epic Games Store.

Here is a table of the game's PC specs: 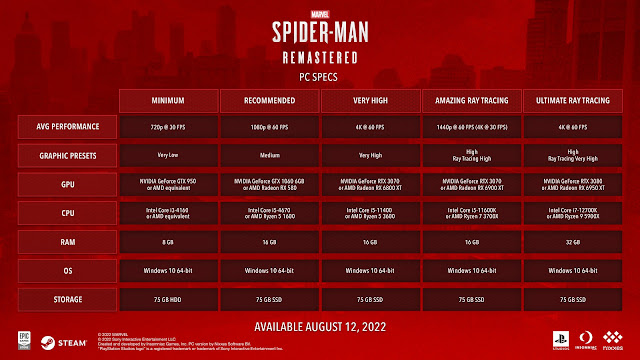 The game also went live to pre-order last week. If you buy the game before launch, you get early unlocks for 3 in-game skins, an 'early unlock for the Spider-Drone combat gadget', and 5 extra skill points. But, in my opinion, at least, these perks aren't worth the pre-order. Spider-Man's progression system is satisfying and fast, so unlocking these skins and gadgets won't take long. And for the skill points, I never felt under-powered when I first played the game, so extra skill points aren't essential.

Marvel's Spider-Man Remastered is likely to be PlayStation's best-selling game on PC, both because of its excellent quality but also because of the undeniable reach the webhead's brand has around the world for all age groups. The game is also the first project from Nixxes Software since their acquisition as a "PC port house" by Sony last year.

Marvel's Spider-Man Remastered releases on August 12th and comes along with 3 DLC packs, and a future full of exciting and hilarious modding opportunities.

Possible IPs to be adapted into toy form mentioned in the press release are God of War, Horizon, The Last of Us, and Uncharted. SIE's Vice President of Network Advertising, Loyalty & Licensed Merchandise, Grace Chen - who we talked about last week in regards to PlayStation Stars - has this to say about the partnership:

"We are committed to creating the highest quality gameplay experiences for our community of global fans and finding new ways to bring our most beloved characters to new audiences. Working along with Spin Master, we are excited to continue our reach in presenting our gaming IP through authentic and innovative toys and games to our passionate PlayStation community around the world."

Earlier this year, LEGO launched a Horizon set in collaboration with PlayStation, and it looks like Sony is continuing its push into the toy sphere. 'Spin Master's PlayStation toy line is anticipated to launch in Spring 2024'.

In 2021, Sony made its first big push into the world of e-sports, buying the mega-popular fighting game tournament EVO. This push continued last week, with the purchase of an esports tournament and stats database called Repeat.gg.

Repeat organizes 'automated, easy to enter tournaments that can scale to millions of simultaneous players.' The press release announcing this deal notes that with SIE's backing and support, 'Repeat will have the opportunity to scale and create esports events for millions of players.'

The main benefits of this acquisition are that Repeat 'will have access to more resources, game titles and technology,' allowing them to innovate and expand their reach and opportunities. They also note that this acquisition won't have any form of platform exclusivity, and 'will continue to support PC, mobile and other consoles alongside PlayStation'.

It is clear PlayStation sees esports as something with untapped potential, and with their recent moves in the market - the EVO purchase, Inzone line of gaming hardware, and the newfound focus on live service games - this purchase makes a lot of sense. Let's see if anything worthwhile comes out of this deal.

And that is all for this week's edition of Last Week In PlayStation. Thanks for reading, and I'll see you next Monday.