I have always been interested in the Doom franchise of videogames, and more specifically id Software's soft reboot that began with 2016's Doom and was followed up by Doom Eternal in 2020. The series has been a staple in the videogame industry, and it was the original Doom in 1993, that brought to the first-person shooter genre, the mainstream popularity that it holds today.
During E3 2015, executive producer on Doom 2016, Marty Stratton said that the 3 key principles of Doom are: "badass demons, big effing guns, and moving really, really fast". After playing the demo for this game on PS4, in 2021, I can confirm that Doom 2016 actually has badass demons, big efffing guns, and that Doomguy probably goes to sleep saying, "I AM SPEED!". 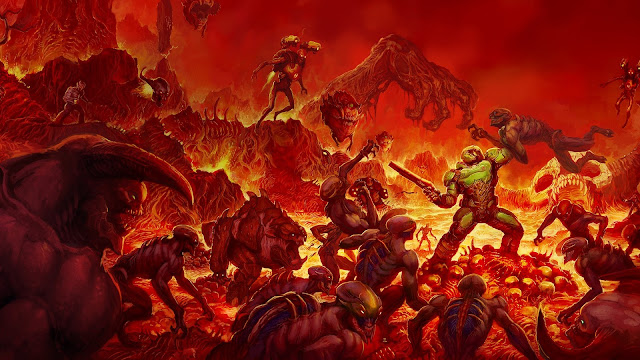 Badass enemies are probably most crucial aspect of Doom's gameplay arsenal that was the least realised in the demo. Since the demo is basically the first chapter or stage in Doom 2016, the enemies are extremely basic and not very badass. The only enemies that you and Doomguy can fight in the demo are Imps, which are the most basic and common enemy in a Doom game. Thankfully, it is not as bad as it sounds due to there being different types of Imps. Some fire at you from a distance with big explosive bullets or a steady stream of smaller one.
There are also some tankier and stronger enemies, which keep you on your toes at all times, changing up combat just enough for it to still be contained inside the walls of what is actually present in the first stage of the main game, but still provide just enough to keep players engaged. Another way in which Doom's enemy design excels is that fact that they have the maximum amount of health at which Doomguy's weapons still maintain their lethality. 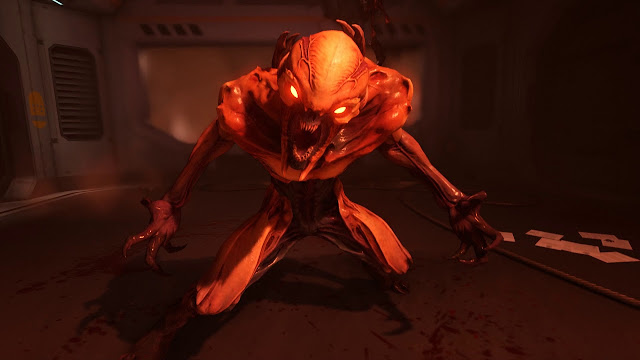 You can't have a shooting game without guns, and thankfully, Doom nails this aspect, even in its demo. Doom starts you off with a pistol, simple enough right? Wrong. This pistol is probably one of the most over-powered weapons I have ever used in a videogame. It does not deal a ton of damage, unlike the shotgun, but the pistol is overpowered with the fact, that it has infinite ammo. While this is not a huge problem in the demo, I can see it hindering progression in the main game's campaign due to players not willing to sacrifice the pistol for other newer guns, due to its infinite ammo.
The combat shotgun, on the other hand, is a much more balanced weapon, and in my opinion, tons more fun to use. The gun's downtime between two shots, encourages players to keep moving in order to avoid being hit. In addition, the combat shotgun's 20 round magazine is just large enough for players to be able to quickly take out waves of enemies, but not too small that the player is forced to reload every few seconds, which drastically slows down the games pacing, and that is not something that you want happening in a game that places such as large emphasis on movement. 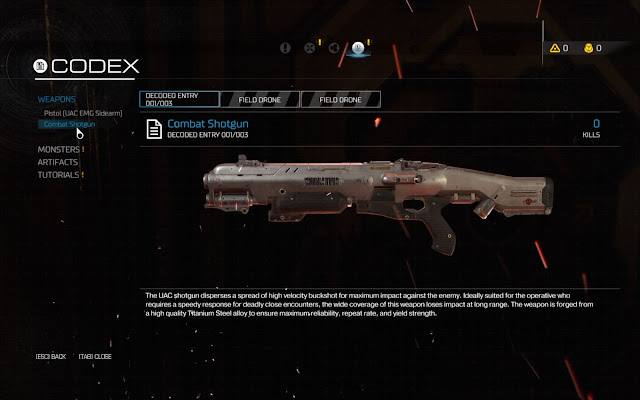 With lethal weapons and aggressive enemies, movement becomes a focal point of Doom's combat. Doomguy is quick, and id Software have done some incredible work in order to keep the game running at a smooth frame rate, without stutters even in the most hectic of firefights. Doom's stages and areas are designed in a way that allows the player to continuously move to gain an advantage in fights. See an Imp standing on that ledge? Maybe climb up that ledge over there on the side and the jump down, attacking the enemy with brutal and swift precision. Or just stand right where you are, and send a barrage of pistol shots their way, without having to go anywhere near. Doom provides players with large amounts of freedom in how they want to approach fights, while cleverly using the glory kill mechanic to encourage a fast and offensive playstyle.
The glory kill mechanic is a stroke of genius. When an enemy is 1 attack away from dying, it will glow blue or golden, signalling the player that they enemy is open for a glory-kill. Approaching and performing a melee attack will have Doomguy performing a brutal finisher, most often leaving the said enemy without a head. This works incredibly well the slow down the frantic combat, in order to give the player some breathing room, while not bringing it to a complete standstill. Not only does the glory-kill mechanic provide a moment of calm before getting back to shooting, it also works as ammo and health refills. Glory-killing enemy's that glow blue will drop ammo, while doing the same to enemies that glow golden will drop health. This further encourages players to employ an offensive style, and keeps the player in the heat of things but not making then stop to refill health, or go searching for a health or ammo pack hidden in some corner of the level. 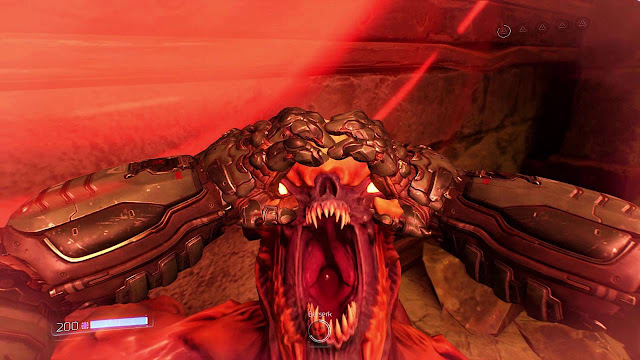 Doom's combat is an incredible balancing act of frantic and fast gunplay, juxtaposed with clever and slower mechanics to get the most out of an incredibly potent formula. There are lethal guns, along with demons that have never been more fun to take down, all laid down on a golden platter of speed and agility. An absolutely incredible combat system, for what I can only assume, is an absolutely incredible videogame.
Labels: Doom 2016 Features
Nandan Patil
Just a guy writing about video games. Also on Medium at platyview.medium.com.